Before I start this blog post. I just want to say.....I AM AN ULTRA MARATHONER!!!

Right, now I've got that out of my system. I can tell you about the race. As you might be able to tell from my subtle comments above, this was my first ultra marathon. I entered it on a bit of a whim, following a suggestion from +Mike Wells. He had been suggesting I run an ultra for a while and thought it would be a good one for my first. After all, it was only a 'baby ultra' at 30 miles!

As soon as I had entered and started receiving the race communications, I knew I had chosen the right race for my first ultra. The emails from (race organiser) Kerry, were informative, fun and friendly. I just knew this was going to be a great event.

I must admit to not taking my preparations for this race too seriously. Other than the Worksop Half one week before, none of my runs following the Berlin Marathon had been much above 6 miles. I was assured, again by Mike, that I would be fine and that the ultra would be 'easier' than the marathon. Certainly the promise of a feed station every 5 miles with cake and tea suggested a more leisurely pace!

On the lead up to the race, I was fairly relaxed about the challenge. However, as race day neared and I spoke to more people about it (mostly non-runners), I started to grow a bit more apprehensive and not so blasé about the challenge ahead. I also didn't realise how early ultra's started. I would need to get up at 4am to give myself enough time to drive to Huddersfield and get registered in time for the 8am start. This was sounding like a tough day already!

I arrived on race day at about 6:40 am. Having parked in the Walkers Arms pub, the landlady was good enough to let us in to use her loo. She then directed me to race HQ (a portacabin at the bottom of the field!). Andrew (@mrafletch) was already there and looked every part the experienced ultra marathoner. As expected, the welcome from Kerry and her crew was warm, if a little chaotic. We were all registered in good time and there was plenty of time for bacon rolls and tea. I was liking this already. Before long Mike (@mikew30), Catherine (@mrsbedders) and Tracy (@temott10) had all arrived. I see Mike fairly regularly but it was good to finally meet the other three outside of Twitter! 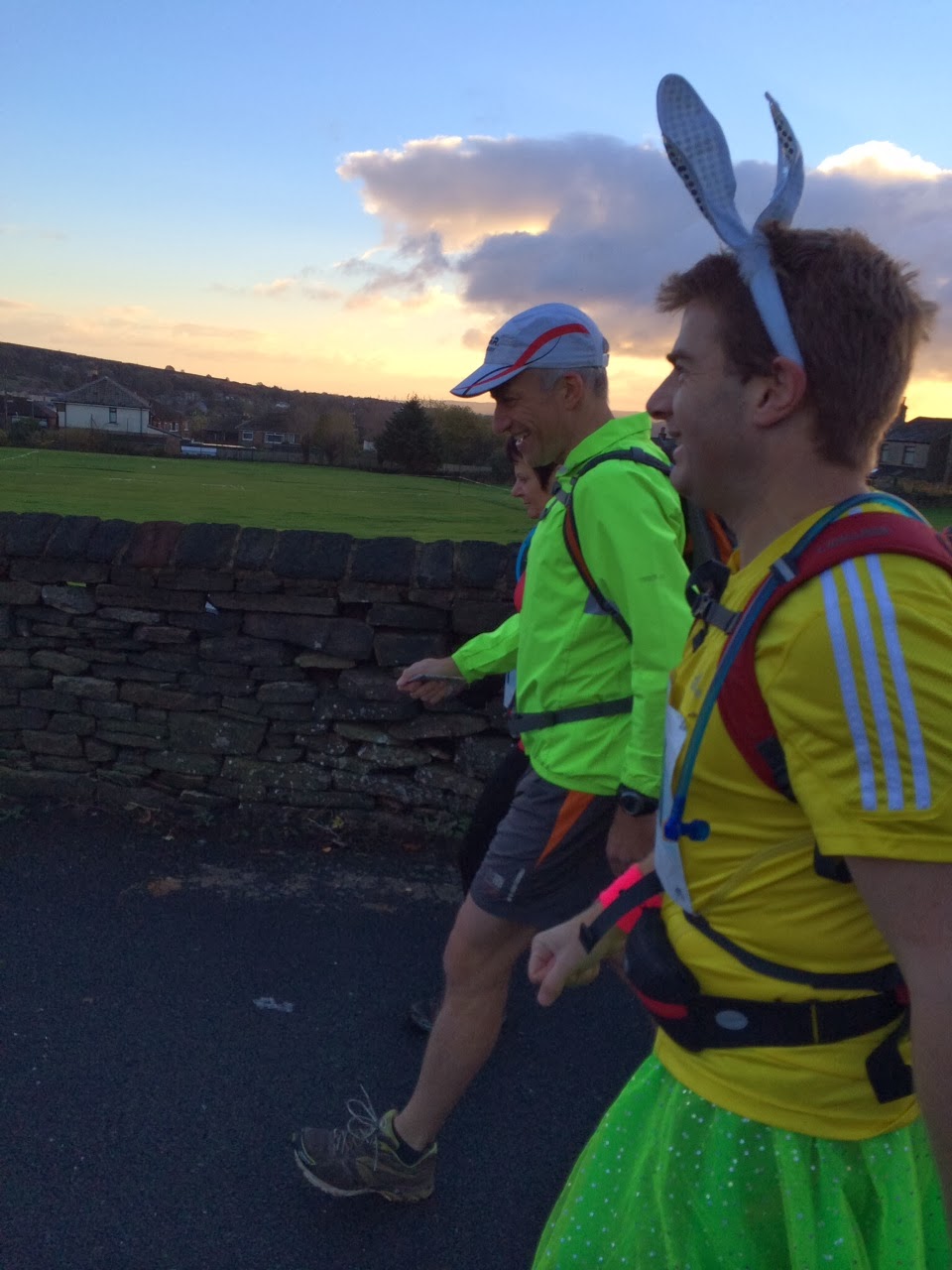 The sun's not even up yet!

Just before 8am Kerry gave the race briefing and were then led into the village for the race start. A final few words from Kerry and the horn sounded and we were off. Prior to the race I'd been promised that we would be walking the hills. Well, the race started up a fairly steep incline which everyone shot up like a rocket! I think it was the 'Pavlovic' response us runners have to the sound of a bell/horn/gun and the pent-up enthusiasm associated with the start of a race. Before long though everyone had settled into their own groups and natural pace. The early part of the race was bright if blustery and it felt great to be moving at last. The views, even really early on in the race, were spectacular and, I hoped, a sign of what was to come. 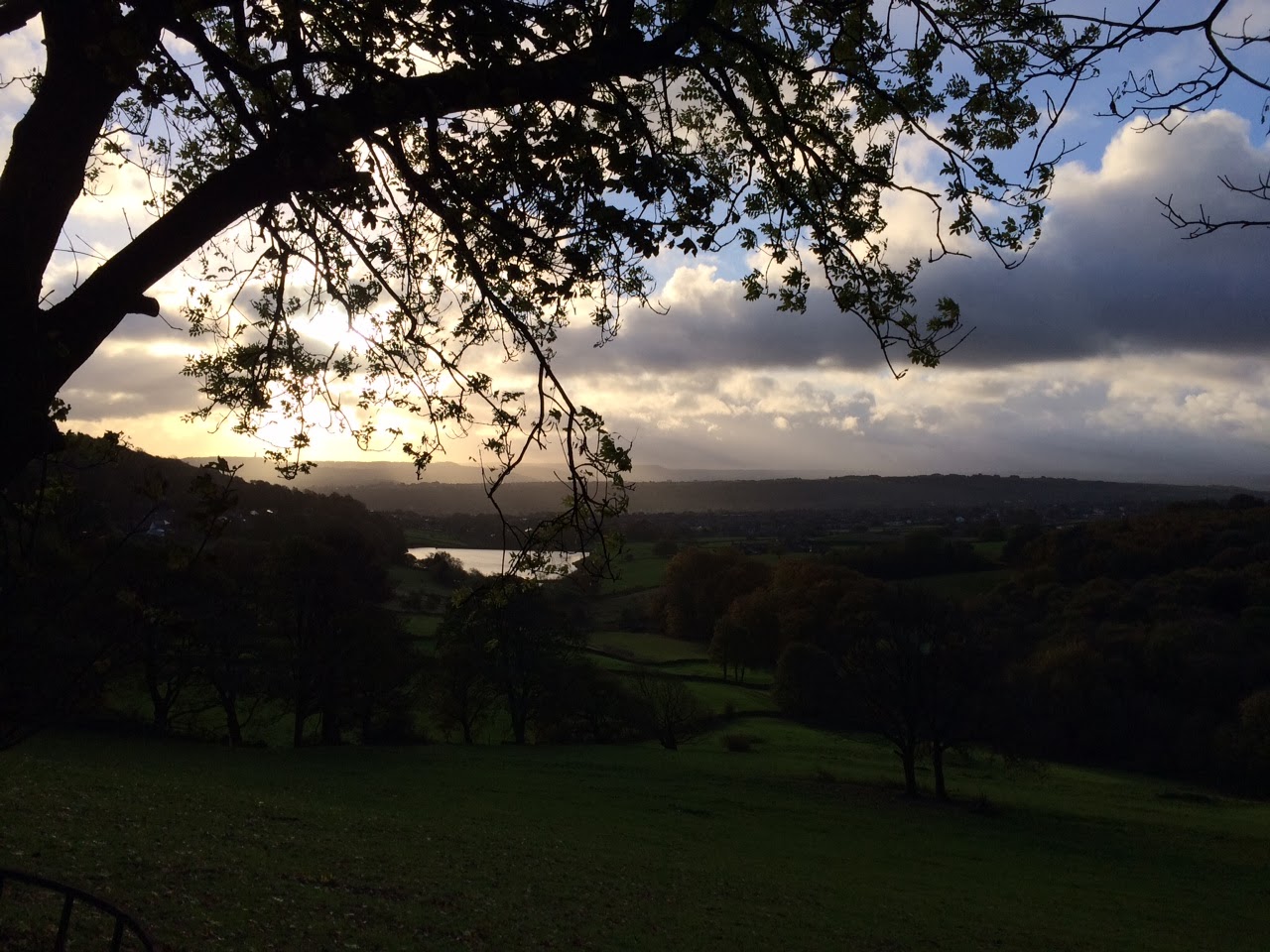 Any thoughts that this might have been easy had been dispelled quite early on in the race (quite how I thought running 30 miles was going to be easy, I am now not quite sure!). It was evident that this race was going to be 'Yorkshire Tough'. The weather can play a huge part in any race and certainly during an ultra, where you are out for longer and often in a more exposed landscape. In the early part of the race we saw a bit of rain but it always moved over quite quickly, largely down to the fairly strong winds. The upside was that we dried out quickly and were treated to lots of rainbows! 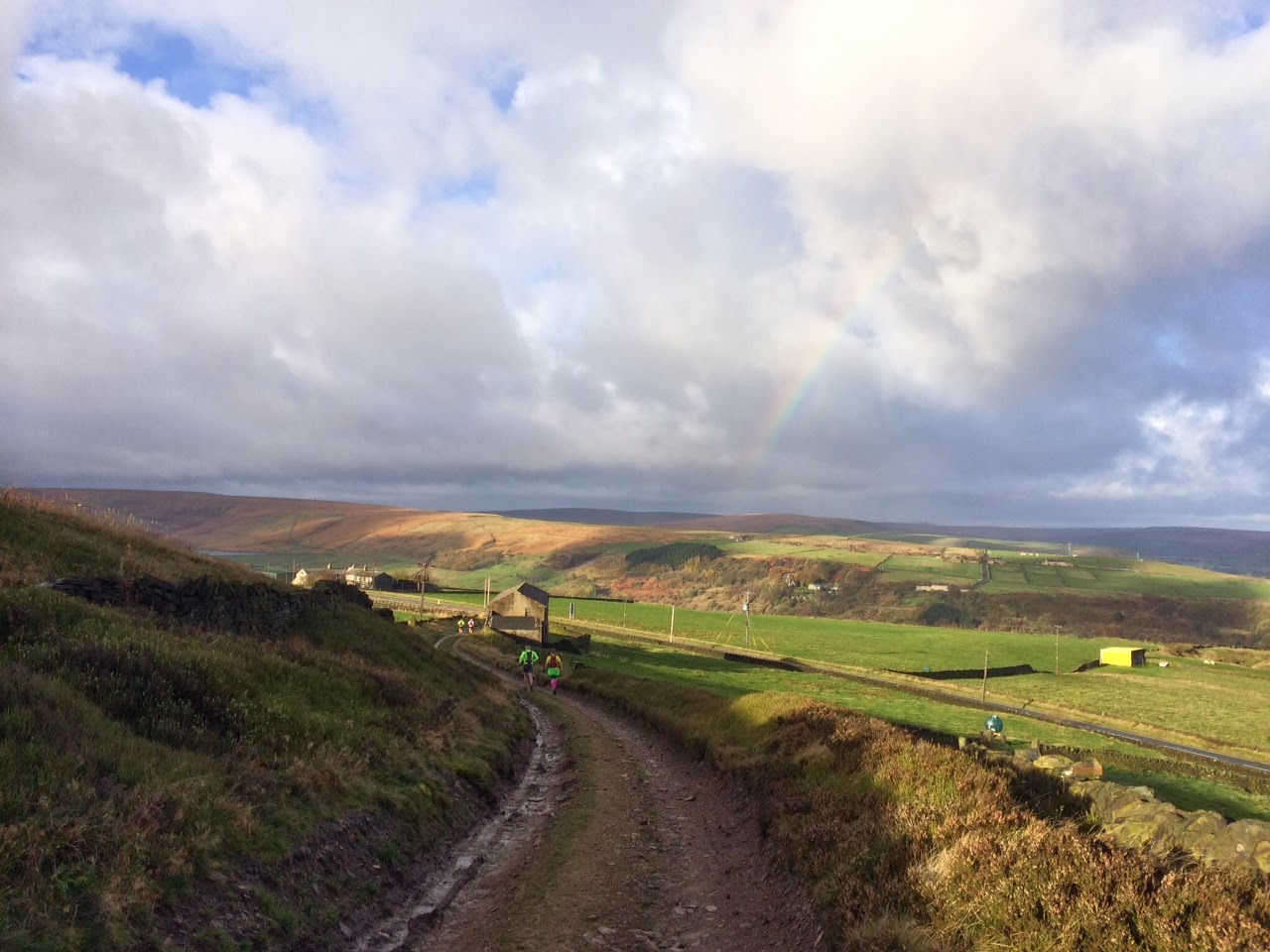 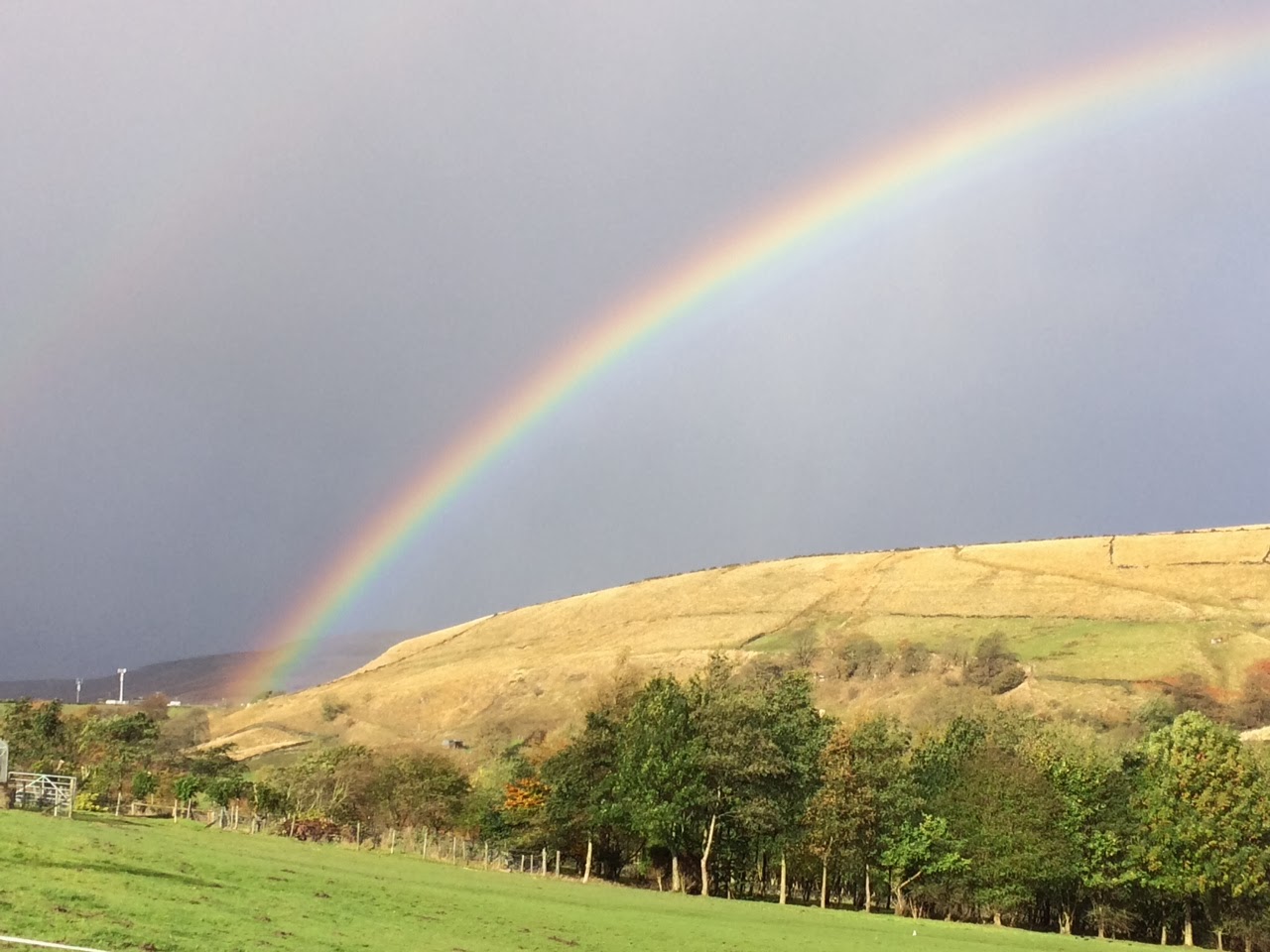 I must say a huge thank you to all of the marshals out on course on Sunday. As tough as the conditions were for us runners, the real hero's were those who gave up their time to stand out at the feed/aid stations along the route. 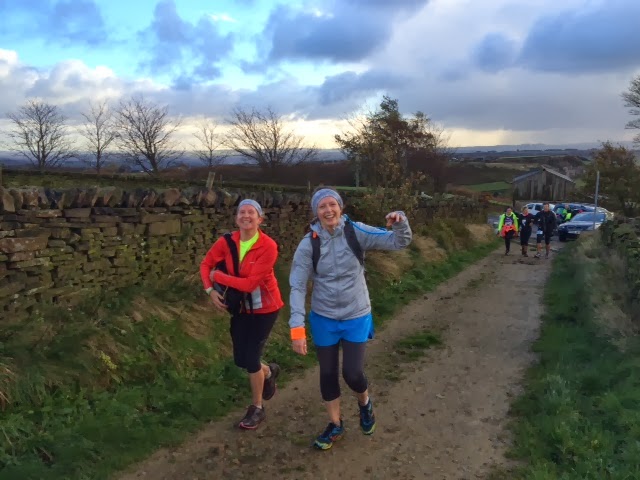 Catherine & Tracy re-invigorated by a stop at the feed station!
I am renowned for having a small bladder. Not a great claim to fame I know but there it is. I don't know why but I did seem to need a lot of 'comfort breaks' during the race. I wasn't the only one though. It was during one of these breaks that Mike lost his famous bunny ears and had to make short diversion to go and retrieve them from behind the wall of a farm! 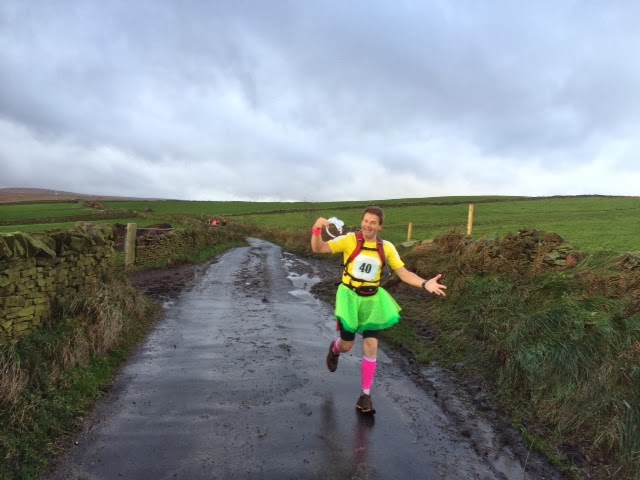 Mike is delighted to be reunited with his bunny ears!
I mentioned earlier in the blog that the views were stunning and they only got better as the race went on. One of the things I enjoyed most about running an ultra was being out in such an interesting environment, at times, seemingly miles from civilisation. 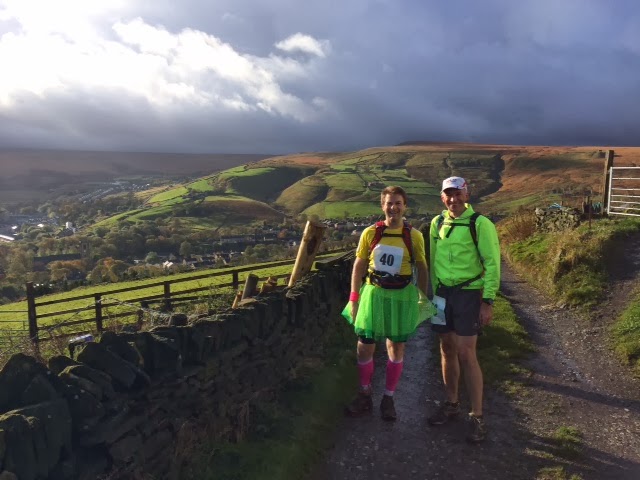 There's nothing like a neon tutu to enhance a beautiful view!
Up to this point everything had gone to plan. The weather was a bit iffy but it was bearable. I guess it wouldn't really have been a proper ultra had everything gone to without a hitch and sure enough, we got lost, twice. Luckily Mike had pre-programmed the route into his Garmin and that, along with some local knowledge, saved us from straying too far off course as some other runners did. 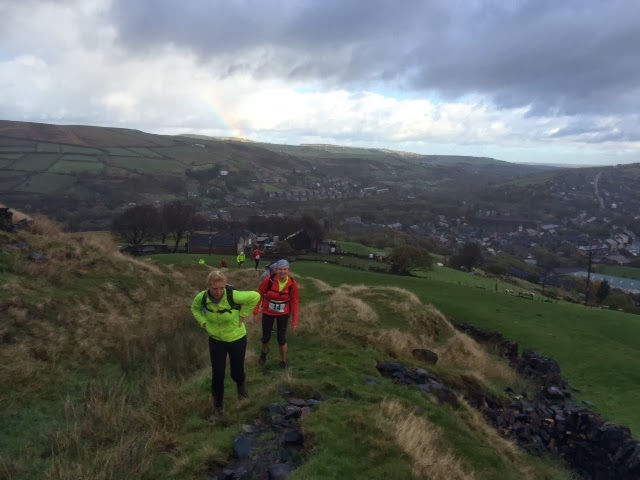 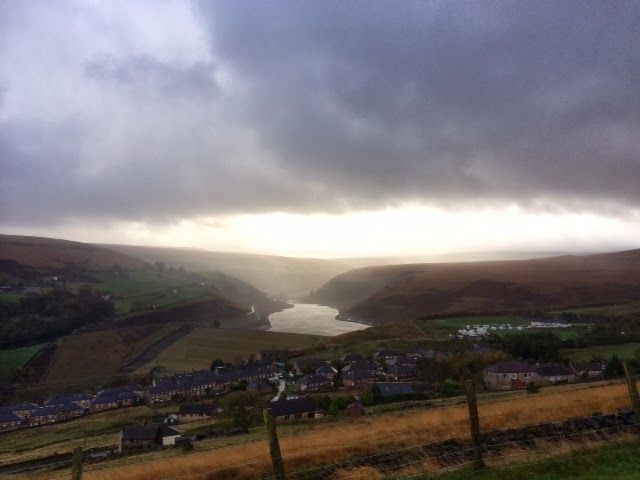 ....................but the views are good!
As with getting lost, it seems adverse weather is part and parcel of any good ultra and the weather in North Yorkshire certainly did not let us down. About 18 miles in it started to rain, then as we climbed toward the top of the moor it REALLY started to rain. By 20 miles (and the 4th feed station) we were in a full-blown hail storm!
This was the point that Twitter friend and fellow runner Martin Bown (@MartinBown) had chosen to meet us. It was really good to see him but I don't think he could have chosen a worse spectator point if he tried! Fair play to him for coming out and braving the elements to run with us for a bit.
Through the storm we could just make out a poor, lonely marshal who was directing us to the camper van. I really felt for her stuck out there with no shelter from the elements. We stopped for a quick cuppa and a butterfly cake before pressing on. The hail continued to batter our faces and legs and by this stage we were soaked through. Thankfully we were descending and before long we were below the storm. I cannot tell you how good it felt to be able to put on a dry pair of gloves and beanie hat. Bliss! 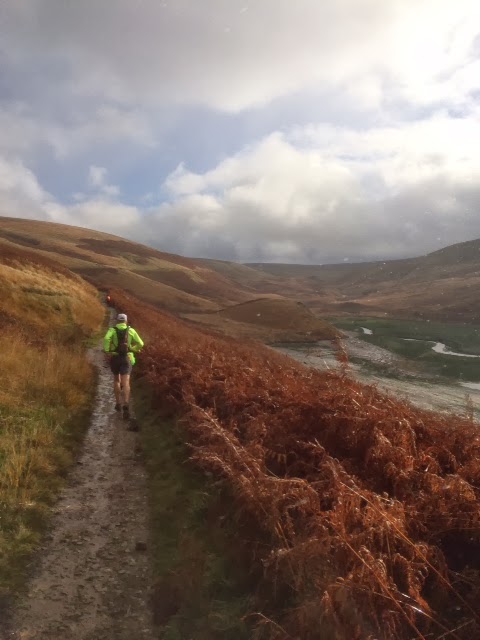 Andrew heads into the hail storm.....
It's amazing how the weather can change the complexion of a race. 20 miles in, cowering behind a camper van in a hail storm was definitely a low point but a few miles on, some new dry kit and a bit of sun peeking through the clouds and I felt much better. My legs were really feeling it at this point though. The descents in particular had really taken their toll but I knew (as long as I didn't pick up a serious injury) that I was going to be able to finish the race. 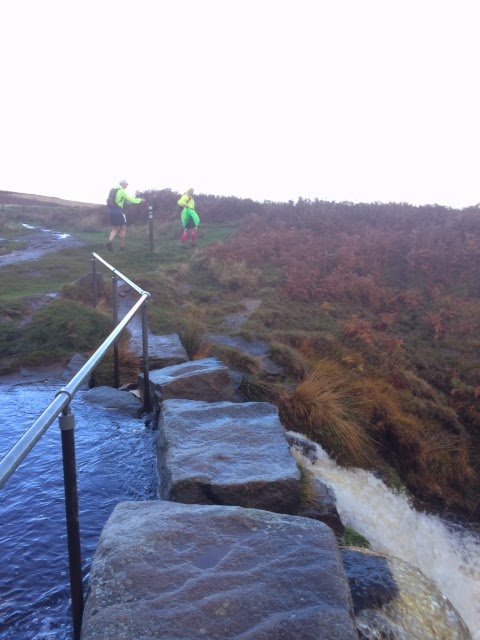 Cross a waterfall. You don't get that in a marathon!
By the time we reached the final feed station (at 25 miles) I was feeling good. The weather had improved significantly and the marshals gave us a real boost, no doubt the chocolate and jelly babies also helped!
Coming back into civilisation also helped after the bleakness of the moor. My legs were screaming but inside of 5 miles and now on roads, I could now begin to think of the finish, cake and a hot bath! Inevitably there was a final sting in the tail. One final hill just to test our mettle. We must have been doing ok though because we passed a couple of runners in the final miles. 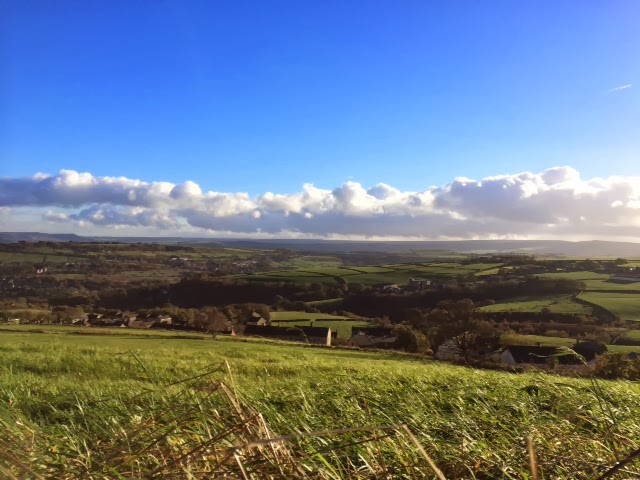 One final hill and one more great view
Andrew, Mike and I came around the corner and finished to cheers from the race organisers and other runners. Our finish time 6 hours 23 minutes. We waited for Catherine and Tracy who came in a short time afterwards to even bigger cheers. They had also completed their first ultra marathons and the sense of achievement was palpable.
All that was left was to put on my race tee and medal, say my goodbyes and head home for a much needed bath and a beer! 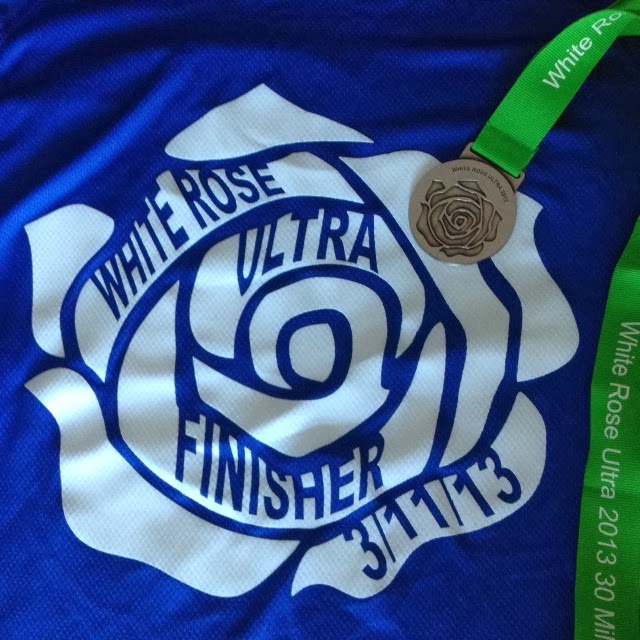 I can honestly say that this was one of the best events I have ever participated in. The pre and post race communications were excellent, the team on the day were superb, friendly and even to a first timer like me were very inclusive. An ultra is certainly not easy but anyone with a good level of fitness can do one and more to the point really should do one. The White Rose Ultra was an excellent choice for my first ultra and it could be for you too.