It is probably fair to say the one's opinion of a particular race is likely to be influenced by how well (or poorly!) they performed on the day. So, in the interests of fairness, I should declare that I had a shocker on Monday. If you haven't read about my marathon build up, you can do so here.

I mentioned the lack of info relating to places to park (and road closures) on the day. Even those who had pre-booked the VIP parking ran into road closures. For those (like me) who hadn't booked the VIP parking, some information in the pre-race pack on places to park in the vicinity (something like we received prior to the MK Half) would have been useful. An hour from the race start, you don't really want to be in gridlocked traffic, then find your planned route involved (un-advertised) road closures, then have to dump your car in an industrial estate and hope you don't get clamped!

Once parked up, the stadium was easy to find. There was plenty of space for runners and their supporters to congregate and I am sure the shelter would have been very welcome had the weather not been so good. I wasn't sure why the organisers had done away with portaloos. There seemed to be plenty of room for them in the car park and they would have helped with the (seemingly inevitable) toilet queues!

I had arranged to meet Rodrigo Freeman (@BrazilianGunner) who had popped down to offer some support to me and some of his team mates. Rod has been very supportive and has offered me some great advice through Twitter, so it was a real pleasure to finally meet him.

The race start was very close to the stadium and easy to find. The race announcers could have done with a better PA system. I was just over halfway back and couldn't hear a word of what was being said. I felt that having only 2 categories of start pens would lead to a slow start to the race and this, along with quite a narrow first few hundred metres did mean a slow start for most. Having more incremental pens (based on predicted times) might have helped.

The atmosphere at the start was very positive and the support in the early stages of the race was also good. The course was billed as being scenic and to be honest, I am struggling to come to a conclusion about it. There were some relatively pretty parts, such as the section around Willen Lake. Some parts were a bit soulless, like the early sections round the near deserted commercial centre. A lot of it went though housing estates or were run on the Red Routes and a lot of it was just a bit anonymous. This is not meant to be a criticism of the route (or Milton Keynes as a whole!) it's simply just my observation. There were some benefits to the route. Such as the fairly consistent support and the guy on about 7 miles misting us with his hose pipe!

I had seen Dwight Williams (@dwighty_boy) earlier in the race and I caught him on about 10 miles (I think). Again, I hadn't met Dwight before, so it was good to meet him and run with him for a bit. He was in the middle of about 4 back to back marathons, so was taking it a bit easier on the day.

Everyone knew it was going to be hot on the day. I had decided beforehand to stick to my plan of running a sub 3:30 marathon. With the benefit of hindsight, I should have probably adjusted my race goals to factor in the heat. Even early on, runners were aiming for the shade offered by the trees and office buildings. I had lost a minute or so in the first few miles, due to the slow start (and an early loo stop!) I wasn't particularly concerned about this and expected to be able to 'chip away' at this deficit over the course of the race, as I had done in Brighton last year. The undulating nature of the course, combined with some tight turns meant was I was struggling to keep the pace consistent. I managed to hold the pace and went through half way on 1:46, just one minute down on my plan. By this stage, I knew that sub 3:30 wasn't going to happen though. I had stuck to my pacing plan but it had taken far too much out of me. I should have still been feeling relatively fresh as this stage but the heat, along with the issues I referred to in my previous blog were starting to tell.

The undulations and tight turns increased in the second half of the race and included more underpasses and quite a few steep bridges going over the canal. There were also quite a few longer pulls, which were not steep but some of them were quite long. When you hear from the support that "it's all flat from here" the last thing you want to see is more hills! The timing of these, so late in the race made it feel particularly tough. I managed to hold pace until about 15 miles but I had started to slow. I thought, if I can just hold onto 8:30 m/m pace, then I would still be on for a huge PB. By 18 miles though I was struggling to hold onto 8:30 pace and it was all I could do to hold onto 9:00m/m.

I had some experience of running in such hot conditions. My first marathon (VLM in 2011) was similarly hot. On that day, leg cramps had started at about 17 miles and completely consumed my legs, to the point where I could barely control them (think John Cleese in the Ministry of Silly Walks!) I had since learnt a lot about hydration but the cramps I feared eventually hit at 20 miles. They were not as severe as London but I knew a run/walk strategy was all I could do to stop them getting worse. It is amazing how quickly things can change during a marathon. In the space of a few miles I'd had to revise my target from sub 3:30, to getting a PB (3:44:49), to just finishing the race and not getting a DNF!

I was starting to see runners drop out, collapsed in the shade or weaving around in various states of delirium. This is probably a good time to praise the marshalls and first aiders. Everyone that I saw that had got into trouble was quickly seen to. It did serve to put my own 'bad race' into perspective though. 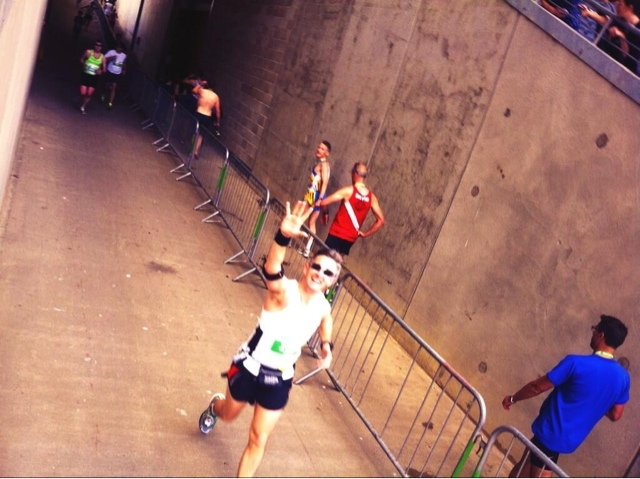 The run/walk strategy allowed my legs to recover a bit. I managed to muster some energy and control over the cramps that allowed me to run the final section, which took you into the stadium. Seeing my Sister, her family and my Nan and Granddad gave me a huge boost and looking at the picture (above) I look a lot better than I felt at that stage. It was probably just the pure, unadulterated relief of having finished!

I enjoyed the stadium finish and it provided a positive end to a fairly torrid day. The race organisers processed us through the finish area efficiently, we were presented with a very nice medal and the stadium provided us with some welcome shelter from the sun. A quick note on the goody bag. I thought it was pretty poor, given the entry fee. A Mars Bar and a banana were welcome, as was the water. Given Gatorade were the official drink, it would have been nice (and good for recovery) to have a bottle at the end. As for the t-shirt, I defy anyone to tell me that they use cotton race t-shirts for anything other than gardening or lounging around the house in! Even much cheaper races (of £10 or £15) give you a technical tee. At least they can be used for running in and what's more, it's a way for the organisers to promote their event at other races etc. 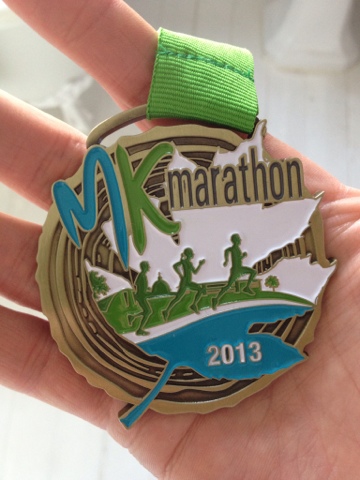 In the end, I came in just a shade over 3:56 and having reflected on things I'm not too disappointed.  It is also interesting how different your perception of the race can differ from the reality. For instance, on 32k I was 508th male. Given that it was in the last 10k where I really struggled, I would have expected to have lost a lot of places. It certainly felt like a lot of people were coming past me! In fact, I only lost 13 (male) places, finishing as 521st male. Given I was in 585th position at 10k, I actually made up ground on other runners over the course of the race. It is perhaps an indication of how most people struggled on the day. 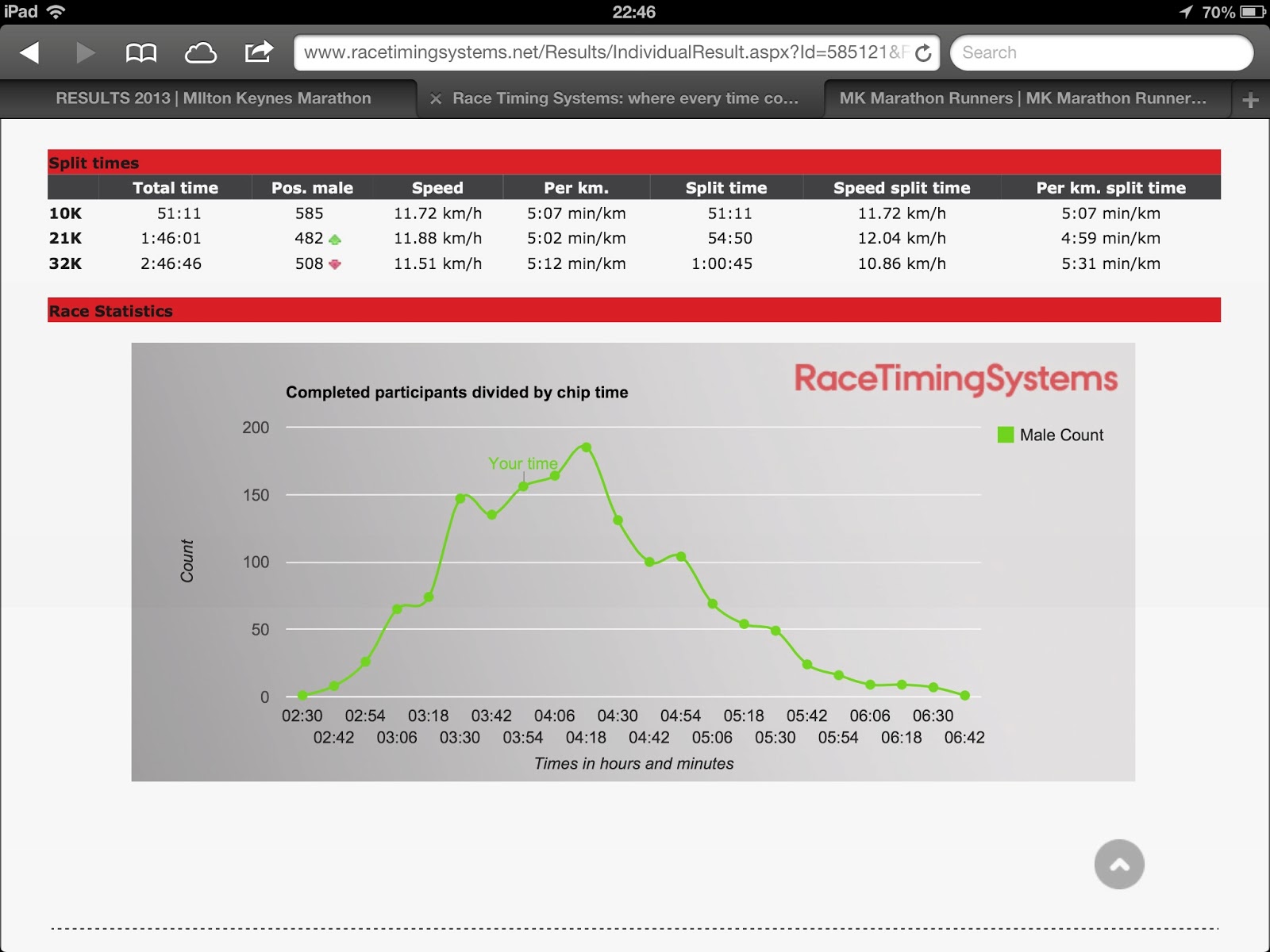 You learn something from every marathon and, for me, the big lesson I take away from this experience is to have a proper taper and revise my race plan if it is a hot day. As someone mentioned yesterday, no marathon is a waste and just to finish is an achievement that less than 1% of the population will experience. 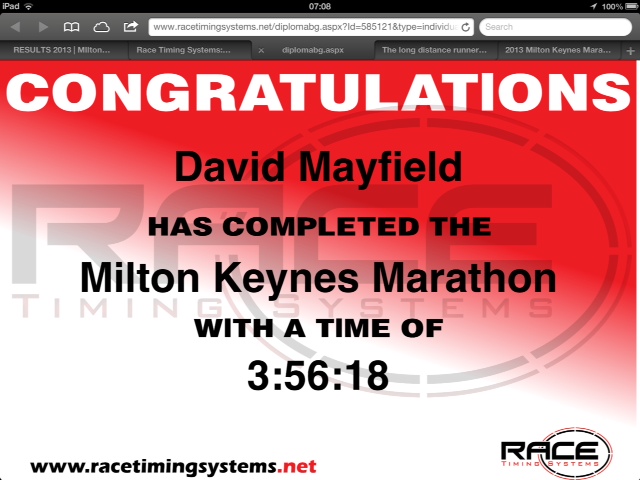 I am interested to hear how you got on and whether my impressions of the race match your own. Please feel free to leave your comments below.