When I entered the 40th anniversary edition of the Berlin Marathon, I had high hopes that it was going to be a special event and it did not disappoint. Entering the race was easy and communication from the organisers prior to the race was very good.

No ballot to enter, Super-fast, flat course, scenic route with fantastic support, great city to combine with a weekend break

Love them or loathe them, the expo is part of any big city marathon experience. I wouldn't say that I loathe them but I go to the expo principally to get my race number.

When I ran VLM, I remember being a bit underwhelmed by the London expo experience. Not so at Berlin. I could not help but be impressed by the scale of the expo. It was held at a disused airport and spanned over 6 hangers! The large retailers had stores to rival those on Oxford Street and you could have bought literally anything even remotely related to running. There were also games and plenty of stalls selling food and drinks. Pre-race pretzel and beer anyone?!


One of the good things about the VLM expo, is that you can just go and collect your race number. This is particularly useful if you are pushed for time or if you just want to save your legs for race day. At Berlin you had to walk the full length of the 6 hangers, through huge crowds just to get to the race collection point. The queues for race numbers were rather lengthy too.

I will preface what I am about to write by saying that I have read different blogs about the race which would suggest that not everyone had the same experience as me. Nick  (@nick_runs) had suggested that we meet prior to getting to the race area. My hotel was only about a 30 mins walk from the start and Nick was a short underground trip away. As it happened, we bumped into each other on the way to the monument we were due to meet at. Perfect timing! Nick's idea to meet outside proved to be a good one because the race start area was very chaotic. We arrived with an hour to spare, which should have been plenty. 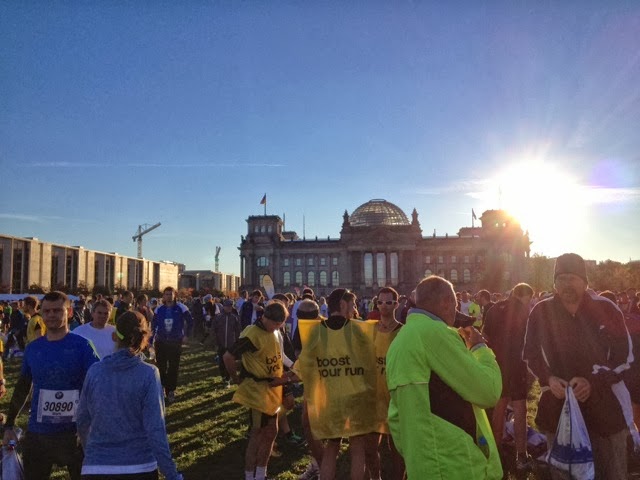 In the shadow of the Reichstag. Not a bad place for a race start

When to arrive at the VLM start, it is very open. You can see the baggage trucks, the toilets, drinks and the route to the start pens. The start area at Berlin wasn't as open and, due to the sheer number of people, was a very difficult place to navigate. The baggage tents were in different parts of the start area and difficult to find amongst the throngs of people. By the time I had dropped off my bag and we had made the obligatory loo stop, we had less than 15 mins to get to our start pen (F). We were not alone, there were thousands of runners all trying to get to the start and we just hit a wall of people. 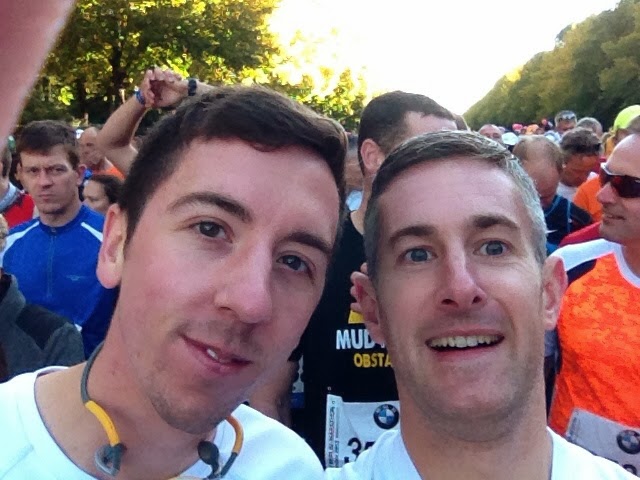 Clearly Nick is more used to a selfie than me!

When the gun sounded for the start of the elite race, we were standing in some woods, still trying to edge our way to the start pen. When we emerged from the woods, it was apparent that it had turned into a free-for-all. Runners were jumping the barriers to get into the start pens and there was no control over who was going where. In the end, we had to wait for the runners already in the pen to move up to the start before there was enough room for us to climb the barrier and get into our pen. Not the model of German efficiency I was expecting! 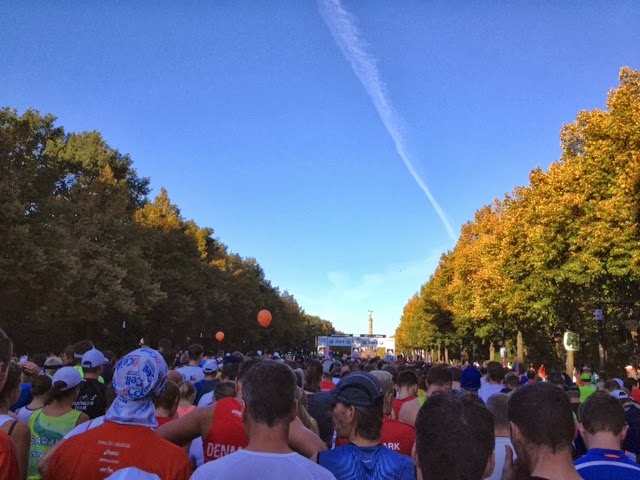 Finally! We are in the start pen and about to set off!

Having been stood around for a while, both Nick and I commented that our legs felt heavy as we got into our rhythm. The start was very bunched and we were not able to run at our target pace of 8:00m/m. This is not uncommon at the start of major city marathons and I kept saying "don't panic, it will open up soon".

Both Nick and I had been dealing with niggles on the lead up to the race, so we were both encouraged by how good we were feeling in those early miles and how much we were enjoying the fantastic support and the sights the city had to offer. The weather was perfect and the running felt easy. We made a mental note to enjoy the experience, knowing we would probably not be feeling this good in the latter stages of the race! 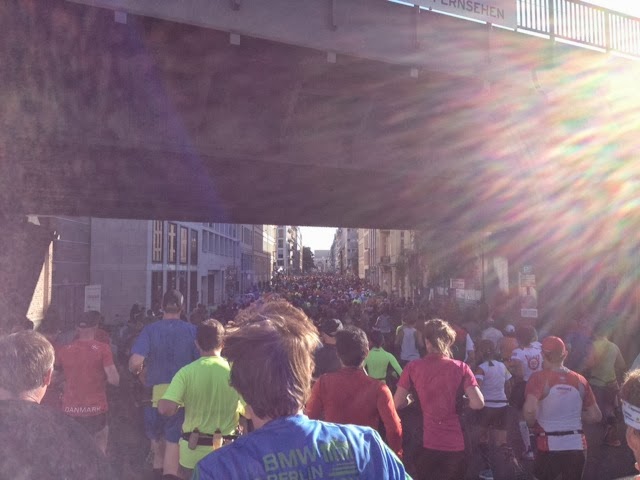 A wall of runners as far as you can see!

One of the reasons the pace felt easy, is because it was easy. Miles 1 - 9 were run at an average of 8:17m/m, with only miles 7 and 8 run anywhere close to our goal marathon pace. I was expecting the field to open out after a few miles but it just didn't. I don't know if this was because by the time we got to our pen we were surrounded by runners that had moved forward from a slower pen. That said, I also passed lot's of runners from pen E. It wasn't until about mile 9 that the road opened up a bit. By this time, we were 4 mins down on our target time. I calculated that if we could run consistent 7:45 m/m's then our sub 3:30 target was still a possibility. We both made a concerted effort to push on. The middle section of the race was our fastest, with miles 9 - 21 run at average 7:43m/m.

One of my minor gripes about the race (and another reason we took longer to cross the line), was the use of plastic cups to hold water, Powerbar drinks and tea (yes, really!) on the course. Not only does this make consuming the drink on the run nigh on impossible, it also meant that some runners were coming to a halt just so they could take a drink. On a couple of occasions I nearly ended up on the floor when a runner cut in from of me to get a drink or just stopped so they could drink without tipping it down their fronts! I know the use of cups in races is not uncommon but I expected bottled drinks for a race of this scale.

One of the downsides to pushing the pace so much was that both Nick and I were tiring by mile 21. Nicks legs were getting heavier and I could feel the dreaded calf cramps (the bane of some many of my marathon's!) coming on. I really wanted to finish the race with Nick but it was clear I had a bit more in my legs at this stage. Very graciously, Nick suggested that I should push on and with sub 3:30 a distant memory, try and hit our plan B time of sub 3:35. Now, I was definitely tiring by this stage but I was surprised by how (relatively) good my legs felt and also by my energy levels. I wanted to push on more but every time I tried to push the pace, the calf cramps started again. In the end, I settled for being able to finish strong and keep the cramps at bay. Those last 6 miles were run at an average of 8:04m/m and I finished in a time of 3:34.06 and had run (according to my Garmin) 26.7 miles. It was a PB by over 10 mins and it was fair to say, I was over the moon! 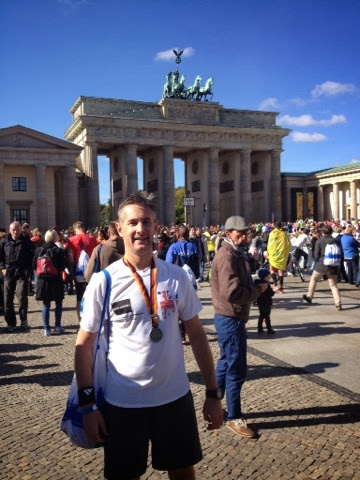 Proudly displaying my medal in the shadow of the Brandenburg gate 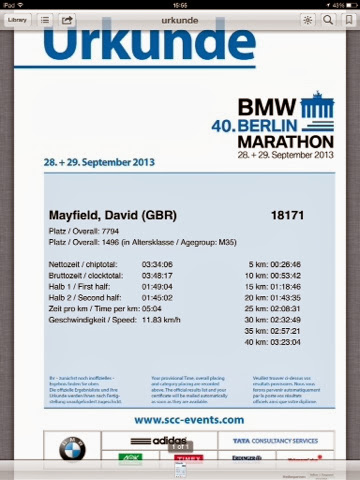 5k splits for the statto's

I am conscious that I have made some negative comments above. I wanted to give an honest appraisal of my whole experience. This doesn't detract from the fact that Berlin Marathon is an excellent race. It is the only race that, for me, has rivalled VLM for size, scale and support. I would recommend it to anyone wanting a fast, flat and well supported big marathon experience in a fantastic city. Finishing under the Brandenburg Gate in the bight Berlin sunshine is an experience that will live with me forever! 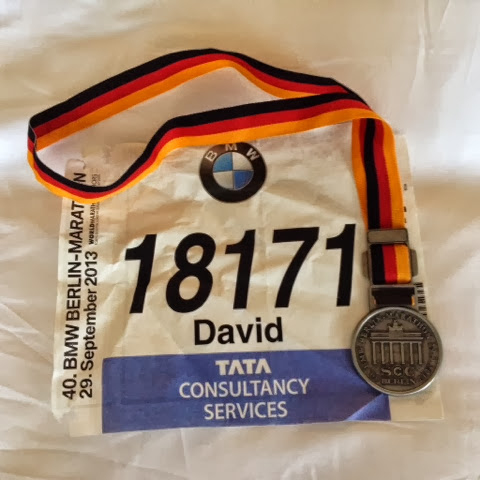 This will be one medal that I cherish for years to come!