I ran the Virgin London Marathon in 2011 (4hrs 16mins and 57secs, if you are interested). It was my first marathon and like a lot of people running their first marathon, I learnt a lot during training but also during the race itself.

Here are 10 pieces of information I would have found useful prior to running this iconic race:

1. It may be significantly hotter on race day than during your training runs. If you live in the UK, you will have done the majority of your training during the winter months. When I ran the VLM in 2011 it was quite a hot day (in the early 20's). I had adjusted my clothing according to the forecast but I hadn't accounted for the difference it would make to my hydration strategy (which consisted of water and gels during training and on race day). Cue: calf cramps at 19 miles due to a lack of electrolytes.


2. If you are staying in London for the race, pick a hotel closer to the finish (on the Mall), rather than the start. Trust me, you will be more willing to travel in the morning than after the race has finished! Public transport is free for runners on the day, so travel to Greenwich Park in the morning is easy.

3. The start of the race (for about the first 4 miles) can be a bit slow, due to the sheer volume of runners. You should be aware of your pacing strategy anyway but you should also be prepared to adjust this to account for any slow miles (or loo breaks!). This adjustment should be carried over the remainder of the race rather than made up in the next few miles.

4. Anyone who has raced before knows that it is easy to get swept up in the excitement early into a race and end up going off too quickly. Well, at VLM, this can happen at almost any part of the race because of the volume of runners and the fantastic levels of support. So, keep an eye on your pacing. Use a Garmin (or similar) and/or a pacing band (available at the expo).

5. The VLM is sponsored by Lucozade, so you will find their gels and drinks at the drinks stations on the course. If you are planning to use these products during the race (as opposed to your own drinks, gels etc), then it is a good idea to use them on your longer training runs. Otherwise, you run the risk of an upset stomach. Not something you want as part of your VLM experience!

6. If you are bringing a support crew with you on the day, it is a good idea to pick out a landmark for them to support from. The crowds are huge and whilst they might see you, it will be difficult for you to pick them out of the crowds. If you are running for a charity (and assuming they have a stand on the course) then this is a good place for them to stand. Seeing my wife at about 22 miles was very emotional and gave me a huge lift!

7. You should also pick a landmark close to the finish to meet friends/family. Mobile networks may well be down.

8. In addition to the photographers on the course, there are also race photographers in the finish area. I neglected to have my photo taken but looking back would have liked an official photo in front of the sponsors hording, sporting my medal. So, be prepared to wipe the sweat from your face and give your hair a quick comb through! There is no obligation to buy the photo's but it might be nice to have the option. 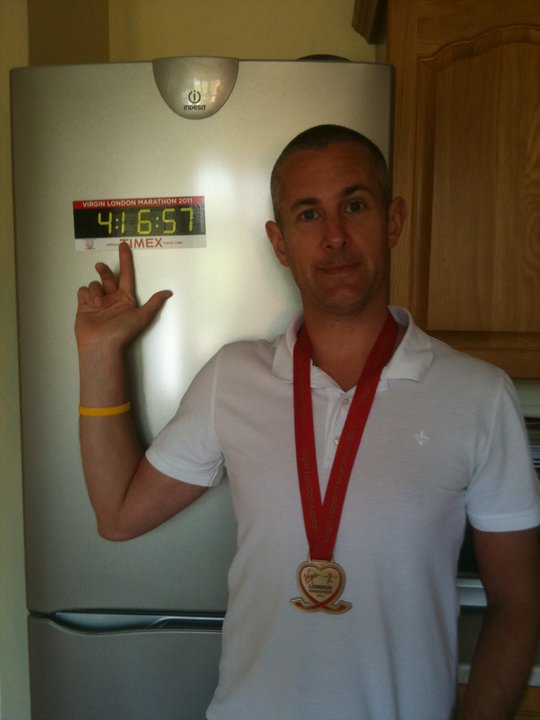 9. You may well have a long wait at the start at Greenwich Park, so make sure you have adequate clothing to keep out the elements. You may also have to wait for a while before you are reunited with your friends/family at the end of the race. I would recommend including a fresh top to change into and any recovery drinks/food within your kit bag (rather than leaving it with friends/family). Note: you have to use the plastic kit bags provided. You can't just stick your number on your own rucksack, for example.

10. Finally, VLM is a unique racing experience that will live with you forever. Enjoy the day and remember to smile, cheer the marshalls and support and take it all in.

Pros: Relatively quick course, good organisation, plenty of toilets at start/finish, plenty of parking, the ability to shelter in the Xscape centre.

Cons: Not particularly scenic, some traffic on course, killer hill in the last mile, no goody-bag.

This was my first time running the Milton Half Marathon. It is part of the Milton Keynes Festival of running, which also includes a 5k and 10k race (which started slightly earlier).

We were able to get parked very close to the start/finish area at the Xscape centre and lucked upon a multi-storey which happened to be free. It was absolutely freezing when we arrived at 9:30am. The car was showing 1c but I reckon it was about -7c with the wind chill! We were able to shelter in the Xscape centre and even managed to get a seat in the Costa Coffee there. With about 20 mins to go, we headed out to use the loos and head to the start line. I think this was the first race I have attended, where there were no queues for the toilets (perhaps everyone was just sheltering inside and using the facilities inside!) The start was well signposted and we got away on time.


I read that they had introduced a wave start (splitting sub 2 hours and over 2 hours, I believe) and this seemed to work well. In fact the first 2 miles were very quick. This is where I need to apologise to #TeamColwick. I had planned to run this race as a pacing exercise for the Milton Keynes Marathon (on 6th May). I had put down 1:44:45 for my #Marchvellous prediction and was planning to tap out metronomic 8 minute miles throughout. A combination of those first couple of miles being downhill and the fact I was keen to keep warm and just get the race done, made me change my race plan and try for a PB. This did mean that my Marchvellous score was going to get blown out of the water though (sorry Helen et al!) My current PB was 1:37:04, gained at the Worksop Half last October. I didn't particularly feel in PB shape going into the race but felt pretty good on day and just wanted to get back into the warm!

The race is run on roads and cycleways. Following the first couple of miles, there were some small undulations as you passed under the many underpasses but otherwise it was pretty flat. We passed through some bland housing estates but also through some nice parks and around Willen Lake. Support was sparse, which is unsurprising, given the conditions. In fact, the only real surprise was that people were out to cheer us on at all! Thanks to all those supporting and to the marshalls on the day, who were in good voice and very supportive.

Asked afterwards what I thought of the route, I struggled to describe it and a day on, I am still struggling for words. Some bits were quite interesting but some were pretty uninspiring. I suspect it could look very different without the blizzards though!

The early parts of the route were shared with those runners (and walkers) doing the 5k and 10k races. There was some passing required, some of which was a bit tight on some of the cycleways but overall the integration of the 3 races worked well. The race was well signposted and there were plenty of water stations. The race did cover some side roads which were not closed to traffic. There were marshalls at some points controlling the traffic but not at others, where cars were idling and waiting for the runners to pass. I didn't see any problems as a result but I thought there was potential if a driver became frustrated at waiting.

I had felt good for the majority of the race but in the final couple of miles I started to tire and the cold started to get to me. I had been warned about the killer hill at the end and I really had to steel myself to try to stay on target for a PB. Looking at my mile splits today, I didn't actually slow as much as I thought. My actual mile pace for mile 13 was 7:37 but my GAP (Gradient Adjusted Pace) was 6:58, the quickest mile of the race. No wonder my glutes are hurting today!


Although I started out planning to run at 8 m/m my 'goal creep' had led me to believe that sub 1:35 might have been on the cards but that final hill put paid to that. Still, I finished in 1:35:56, which was an unexpected PB in tough conditions.

The organisation on finishing was good. The finish funnel worked well. I was passed a medal and grabbed a sports drink and a foil blanket, which was most welcome as I had finished 10 mins earlier than I told my wife and had to pace around shivering until she arrived with my change of clothes! The lack of a goody bag was slightly disappointing and I could have done with a Mars bar (or similar) at that point.

Reflecting on the race, I think the decision to run it hard was more beneficial than my original plan. I still had to watch my pace closely and holding it was a real challenge towards the end. It also showed me that I have built a good level of endurance on my longer runs and a bit more speed than I realised. I am also hoping that it will make the 8 minute miles feel a bit slower now!

Now, I've just got to apologise to my Team Colwick chums for screwing up my Marchvellous predictions!

When is the first day of Spring?

I don't know about you but the winter in the UK seems to have dragged on forever!

I saw someone tweet this morning that it was the first day of Spring today. I don't know about you but it doesn't feel very Spring-like to me. I did some Googling and saw conflicting dates, which included 1st March, 20th March and 21st of March. So, I am still none the wiser!

It got me thinking about what signifies the first day of Spring for me. For some, it will be seeing their first lamb or the sprouting of some daffodils.

For me, it is when I take my early morning run and see the sun rise. After running for months in the pitch black, the days start to get gradually lighter, until you actually see the sun rise and are able to do all of your run in (almost) full daylight. This happened to me yesterday. I am declaring 28th February 2013 as (my) first day of spring. 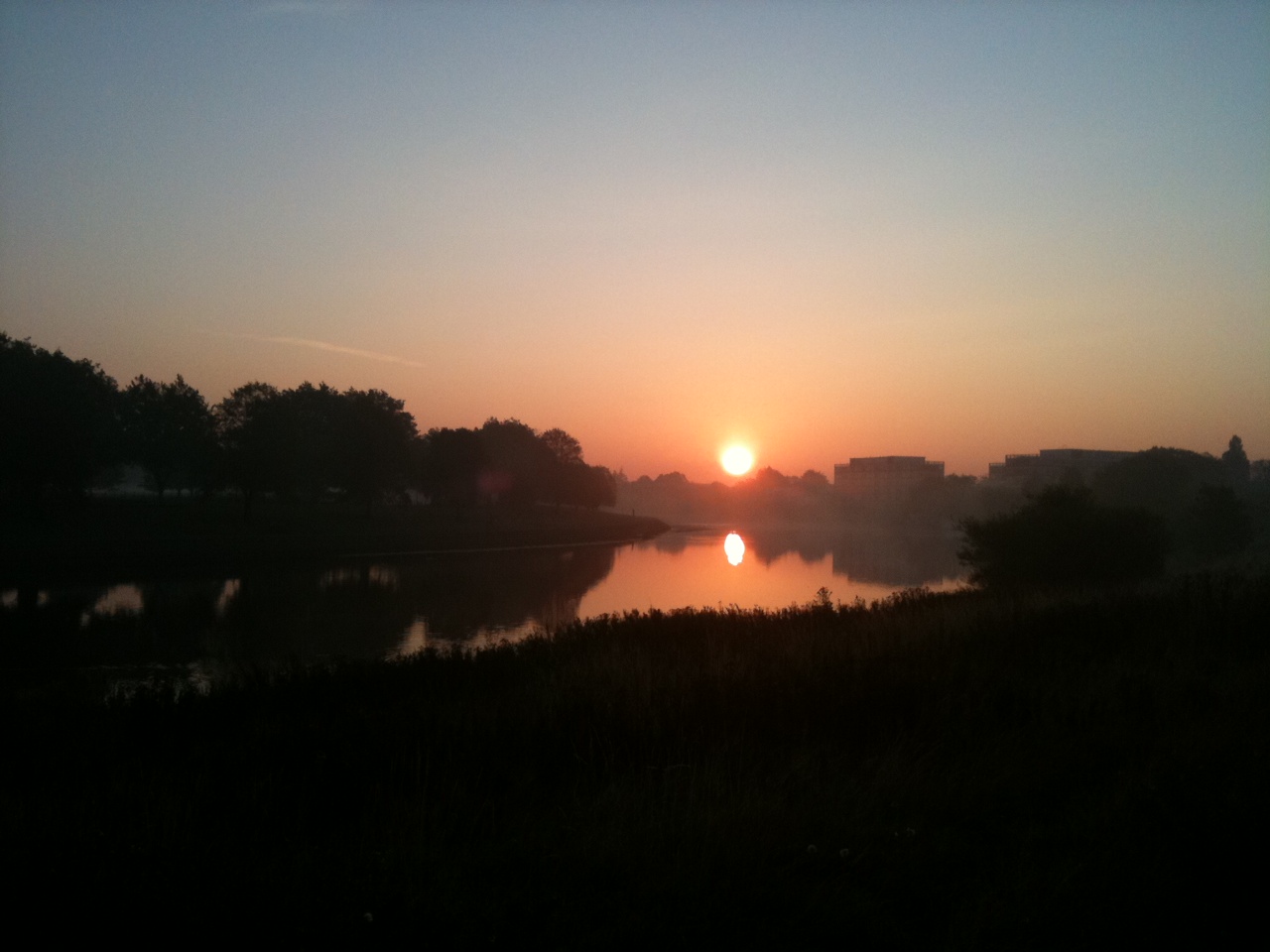 What signifies the first day of spring for you?
Posted by Unknown at 03:34 No comments: